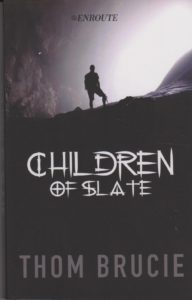 “In Children of Slate, Thom Brucie explores belief, reason, and sensuality in a way that I have not seen before. Rather than pitting these qualities against each other. Brucie interweaves them convincingly in the lives and minds of his characters. The result? an honest exploration of faith. A thought provoking read.”

“Thom Brucie’s latest novel, Children of Slate, takes a close look at the relationships between faith, love, hope, and miracles and reveals that love tempers all the rest when supported by faith and the ‘eyes to see’ and ‘ears to hear’ the presence of God and his miracles in all aspects of an unknown future.” 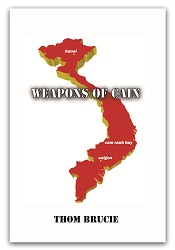 “As much nouveau roman as a war novel, Thom Brucie’s Weapons of Cain invites memory  to take a seat at the table of the long twentieth century—and then feast from the ambiguous trough of personal narrative. Weapons is both a tale and a novel, unpacking the rough intertwine of personal and historical memory in order to dissolve the membranes of official American culture. O’Brien pushed beyond Hemingway, and Brucie pushes beyond O’Brien. This is the book as ambiguous weapon: fragmented chapters fly against shrapnel shards of ironic fortifications. This is Vietnam 2.0: the war novel you’ve never before read.”

“Thom Brucie is a real American talent with a smoking American voice.  His writing is true, potent, and muscular.  Read his book, Weapons of Cain, now – thank me later.”

–Luis Alberto Urrea, 2005 Pulitzer Prize finalist and member of the Latino Literature Hall of Fame,
is the critically acclaimed and best-selling author of 13 books, including his award-winning novel,
Into the Beautiful North. 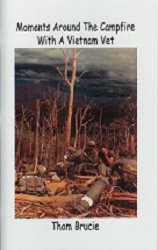 “The poems in Moments Around The Campfire With A Vietnam Vet  flow with an incredible narrative voice spoken from the recollected perspective of a ghost poet with a precise eye for detail, a poet who carries you along the beautiful waterfall of misery with your eyes wide open and your heart in your throat. Each poem commands the page, daring the reader to deny its verity and weight, forbidding the reader to dismiss the small totals of Vietnam we still don’t speak about. Wow. These poems took my breath away.”

“Moments Around The Campfire With A Vietnam Vet is full of poignant poems about various characters who fought in the Vietnam War. Thom Brucie’s style is direct, his images clear and specific, and the poems often end on a sardonic or ironic note. He makes us feel as though we were actually invited into the camp circle to hear the stories of these people, to know their longings and aspirations and disappointments. This is one of the best books of war poems I’ve ever read. I promise, you won’t be able to put it down.”

–Maria Mazziotti Gillan, Binghamton University; American Book Award winner for
All That Lies Between Us.

View the book trailer:  Moments Around The Campfire “These extraordinarily moving stories explore the intricacies of human suffering and joy. Thom Brucie writes with rare power and insight; his lyrical descriptions echo in the heart and mind of the reader.”

“Brucie tells the stories of ordinary people caught in the struggles of those small heroic moments we all must face when action demands courage and courage demands faith.” 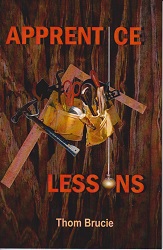 “Part elegy and part extended ars poetica, Thom Brucie’s Apprentice Lessons participates in that ongoing dialogue between poetry and the world around it, between words and the spaces they inhabit. For example, in the poem “Legacy,” Brucie wonders (and fears) “for those who sleep / under the roofs I built.” Will they be dry and, by extension, safe?Carpentry, in other words, assumes a much broader metaphorical resonance, ushering us back to the very origins of the word poet—one who makes.”

–Chad Davidson, author of From The Fire Hills, The Last Predicta, and
Consolation Miracle.

“Poetry at its root is to make. So poets, like all craftsmen, have traditionally learned their trade in the workshop of a master. Thom Brucie’s Apprentice Lessons returns us to these origins in an arresting series of elegies and lyric tributes to Virgil McLynn, the master carpenter to whom he apprenticed in his youth. Brucie finds, in the recollections of his teacher, lessons that serve him as a builder of words, as well as of wood, in poems that underscore the humanity of any trade well plied. He learns “you cannot straighten a bent nail/with one swing; / you correct one flaw and / move to the next,” an image, like so many here, suggestive of how to remedy a life and revise the art we hope to make of it. Brucie succeeds in Apprentice Lessons with accomplished poetic craft and the lived clarity that “the aim of the eye is truth… / and caution reminds us / that we do not always stand plumb.”

–Jim Tolan, author of Mass of the Forgotten and Red Walls.

Read a Review
Read the Author’s  Interview Bio – On Writing